Stable prevalence of chronic back disorders across gender, age, residence, and physical activity in Canadian adults from 2007 to 2014 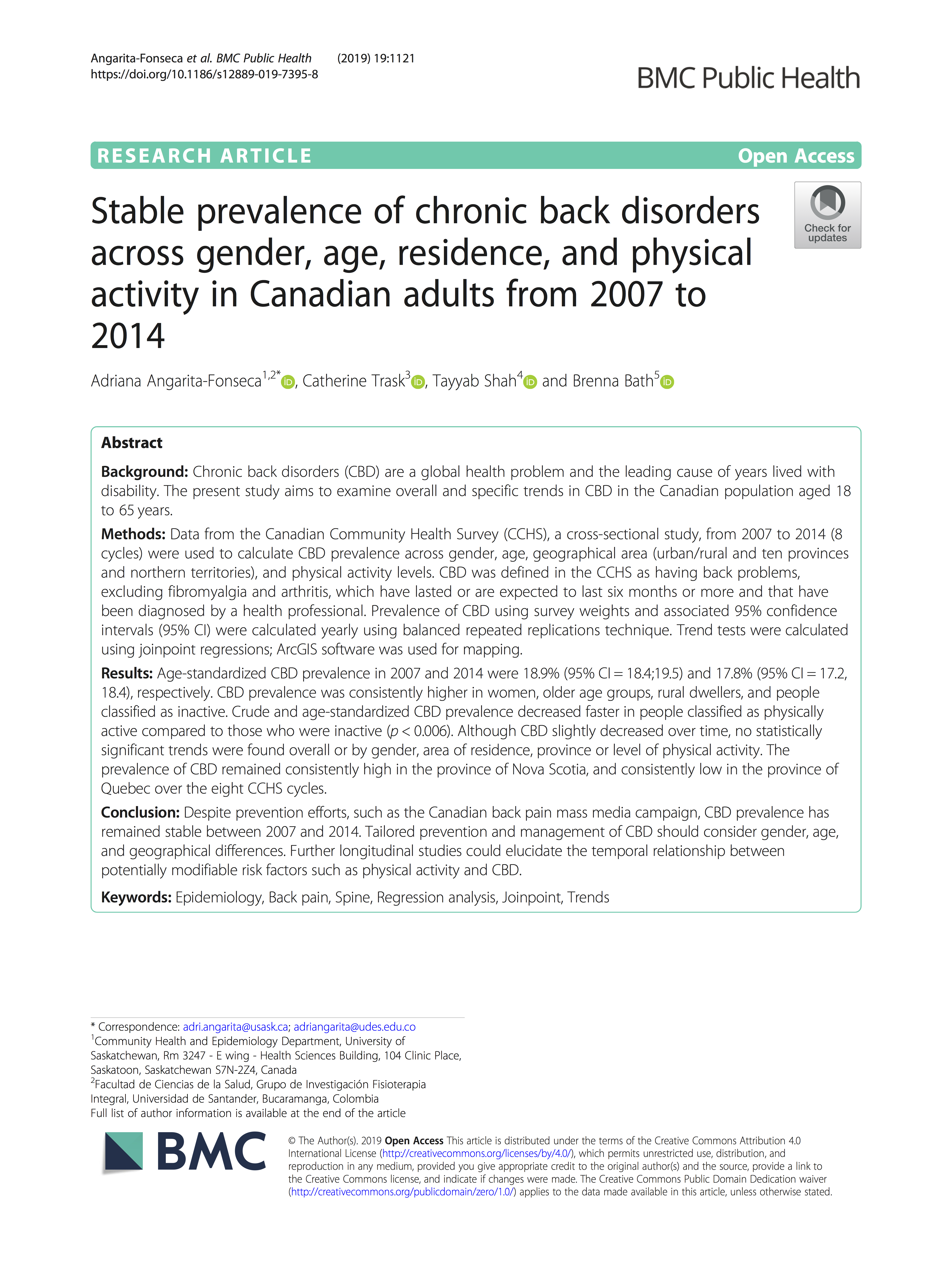 Background: Chronic back disorders (CBD) are a global health problem and the leading cause of years lived with disability. The present study aims to examine overall and specific trends in CBD in the Canadian population aged 18 to 65 years.
Methods: Data from the Canadian Community Health Survey (CCHS), a cross-sectional study, from 2007 to 2014 (8 cycles) were used to calculate CBD prevalence across gender, age, geographical area (urban/rural and ten provinces and northern territories), and physical activity levels. CBD was defined in the CCHS as having back problems, excluding fibromyalgia and arthritis, which have lasted or are expected to last six months or more and that have been diagnosed by a health professional. Prevalence of CBD using survey weights and associated 95% confidence intervals (95% CI) were calculated yearly using balanced repeated replications technique. Trend tests were calculated using joinpoint regressions; ArcGIS software was used for mapping.
Results: Age-standardized CBD prevalence in 2007 and 2014 were 18.9% (95% CI = 18.4;19.5) and 17.8% (95% CI = 17.2,18.4), respectively. CBD prevalence was consistently higher in women, older age groups, rural dwellers, and people classified as inactive. Crude and age-standardized CBD prevalence decreased faster in people classified as physically active compared to those who were inactive (p < 0.006). Although CBD slightly decreased over time, no statistically significant trends were found overall or by gender, area of residence, province or level of physical activity. The prevalence of CBD remained consistently high in the province of Nova Scotia, and consistently low in the province of Quebec over the eight CCHS cycles.
Conclusion: Despite prevention efforts, such as the Canadian back pain mass media campaign, CBD prevalence has remained stable between 2007 and 2014. Tailored prevention and management of CBD should consider gender, age, and geographical differences. Further longitudinal studies could elucidate the temporal relationship between potentially modifiable risk factors such as physical activity and CBD.

Stable prevalence of chronic back disorders across gender, age, residence, and physical activity in Canadian adults from 2007 to 2014.